Over one hundred years before Donald Trump unleashed a white supremacist mob on the US Capitol to steal the 2020 election, another disputed presidential election nearly produced a similar result. The election of 1876, between Rutherford B.Hayes and Samuel Tilden, was one of the most contentious in history and could have been a blueprint for the violent insurrection of January 6, 2021. The 19th century electoral dispute ended with the “Compromise of 1877,” an agreement made behind closed doors, which resulted in the end of Reconstruction.

Let’s flash back to the beginning of the Reconstruction era, which followed the end of the Civil War. The purpose of Reconstruction was to ensure that the basic fundamental rights of Black people to participate in democracy were not infringed upon by white southerners and to rebuild the south. It seemed to be working. By 1870, Senator Hiram Revels of Mississippi and Representative Joseph Rainey of South Carolina had become the first Black politicians to serve in Congress. However, given that the United States was founded on a system of white supremacy that relied on the genocide of Native Americans and the subsequent enslavement of Black people, not everyone embraced that change. The completely white democracy that many white southerners loved was gone, and white elites in Southern states were divided on how to deal with the emancipation of enslaved Black people.

For years white people used a variety of methods to preserve white power, including legal strategies, intimidation, and fraudulent acts to undermine the voting rights guaranteed to Black people under the fifteenth amendment of the Constitution. But one central strategy predates the January 6th insurrection: violence. Throughout the late 1800s, mobs of white southerners violently overturned and stole elections–in Wilmington, North Carolina, in 1898; in Colfax, Louisiana, in 1873; in  New Orleans in 1874, and, in Hamburg, South Carolina, in 1876–to prevent diverse democratic governments in their states. The violence was led by white supremacy-based terrorist hate groups, such as the Ku Klux Klan and the lesser-known Red Shirts, who inflicted fear on the Black population of many Southern states by making it impossible for Black people to vote safely.

While this violence led some states, such as North Carolina, Texas, and Arkansas, to create militias to combat the Ku Klux Klan, many southern governors feared the destruction that could follow Klan retaliation. Eventually, President Ulysses S. Grant and Congress decided to act after hearings in 1870 and 1871, and in 1872 President Grant ordered Attorney General Amos Ackerman to put the Klan on trial.

But the Hamburg massacre in South Carolina proved that the government’s actions were not enough. Hamburg,SC was a city full of Black prosperity, with a Black mayor, a Black sheriff, a number of Black city officials, and numerous Black state legislators residing there. In July 1876, a mob of white supremacist men attempted to have the guns of Black militia members taken from them. After the soldiers refused, the white men attacked them with a cannon. Others were later captured by the mob and murdered, including the sheriff who was caught and mutilated by members of the Red Shirts, who cut out his tongue. The massacre ended with one white man and seven Black men killed. Ninety-four white men, including a former Confederate general, were indicted, but court officials released the men on bail fearing another violent attack from the Red Shirts. They postponed the trial conveniently until after the 1876 election.

Despite a congressional investigation and national media coverage, the murderers never faced any consequences. South Carolina, which had a majority Black and Republican voting population, became fully controlled by white Democrats after ousting Black politicians, such as Prince Rivers, from their roles in the government by accusing them of corruption. The consequences for those involved in the insurrection of 2021 are still being determined, but the lack of immediate action during the insurrection prevented everyone present from being arrested and charged. This is a pattern. Throughout history, the consequences for white violence have rarely matched the crimes white supremacists committed, when any consequences have been given at all. 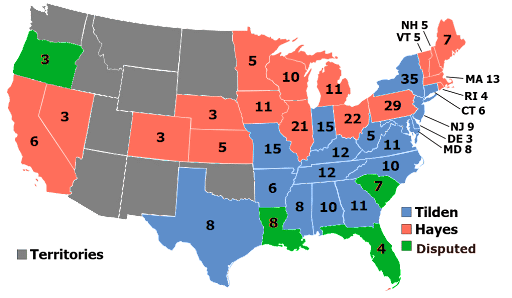 The continued violent attacks on the Southern Black population by the Southern white population resulted in  zero criminal or political consequences for those involved. This culminated with the election of 1876, which became one of the most important elections in American history as it determined if the Reconstruction process would improve or be eliminated.

On election day in Edgefield, S.C., around 300 armed Red Shirts rode their horses to the voting site to intimidate Black voters. In Barnwell County, S.C., they did the same. Voter intimidation occurred in Louisiana, Florida, and other southern states, as did Democrat-run voter fraud tactics. Democrats (then the party opposed to Reconstruction) used repeat voters and printed fraudulent ballots to manipulate illiterate Black voters into voting for the Democratic candidate, Samuel Tilden. These tactics resulted in inflated voter turnout numbers, with 81.9 percent allegedly voting nationally, and 101 percent of registered voters mysteriously voting in South Carolina.

Election results were disputed in four states–Florida, Louisiana, South Carolina, and Oregon–although some Democratic newspapers declared victory for Tilden. There was anxiety as Tilden led in the popular vote by over 250,000 votes and was one vote short of the electoral college win. The popular vote margin can be attributed to the voter fraud tactics mentioned above. With the two parties controlling different chambers of Congress, a fifteen-member Electoral Commission was created and ultimately decided to award Rutherford B. Hayes the twenty electoral votes he needed to become President, much to the dismay of the Democrats who claimed election fraud. Democrats protested, shouting “Tilden or blood,” and threatened to send an insurrection to Washington, DC to “see that the count is made according to their wishes.”

On March 2, 1877, Congress reached an agreement, announcing Rutherford B. Hayes as the next president of the United States.The Compromise of 1877 was born, and while there is no documentation from that meeting, the key outcome was understood to be the de facto end of Reconstruction. In his inaugural address, Hayes stated that the South could govern itself again. Decades later, in 1906, Benjamin “Pitchfork Ben” Tillman, a notorious Red Shirts leader and eventual Senator, admitted to committing voter fraud in the 1876 election: “We set up the Democratic Party with one plank only, that this is White man’s country, and White men must govern it,” Tillman said. “Under that banner, we went to battle. It was then that we shot them. It was then that we killed them. It was then that ‘we stuffed ballot boxes,’ because this disease needed a strong remedy.”

After Reconstruction, the Red Shirts continued to wreak havoc across the southern states and continued to count elected officials among their members. The actions of the Ku Klux Klan and the Red Shirts, including those such as Claude Kitchin and Benjamin Tillman, who would later serve in Congress, launched a decades-long disenfranchisement of Black people in the South and began the Jim Crow era. The lack of consequences for this violence sent a message to Black people that they couldn’t expect to safely participate in democracy.

Similarly, Donald Trump invited white insurrectionist violence when he attempted to overturn the 2020 election results. Part of his strategy included spreading lies about election fraud being committed in predominantly Black cities such as Detroit, Philadelphia, and Atlanta. As in 1877, the losing party’s Congressmembers promoted the false claim of election fraud, with  147 members of Congress voting to stop the certification of President Biden’s victory in the 2020 election. In the meantime, corporations continue to contribute to the election campaigns of these Members, showing their commitment to democracy isn’t as strong as their commitment to making sure Congressmembers vote for their priorities.

In 1876, after being treated like property for centuries, Black people wanted to exercise their right to vote safely. Instead, white Southerners threatened, manipulated, and intimidated them, going so far as to threaten an insurrection to achieve their goal of ending Reconstruction. On January 6, 2021, Trump supporters and white nationalists stormed the Capitol to overturn an election they lost. White nationalists continue to disrupt our democracy with violence in order to get the white supremacist-based authoritarian government that they want. Congress has passed gerrymandering and oppressive voting laws to make that goal even easier.

One of the ways to prevent the further rise of white nationalism in this country is to make sure that, beginning at a young age, people are taught the real history of the United States. Our justice system also has a responsibility to hold the insurrectionists accountable for their actions, including members of Congress. To take a stand against white nationalism, the United States must acknowledge the racism that deeply plagues our system. And this time, when white nationalists have inflicted violence to get their way, they must be met with consequences. Otherwise our nation’s history of white violence disrupting our democracy will continue to repeat itself.

Over 171,000 Voters Join the Coalition’s Calls to Nominate Public Interest Minded Candidates to the USPS Board of GovernorsEighty-three groups call on President Biden to fill Postal Board with nominees to hold DeJoy accountable & expand USPS services

Rioting, insurrection, and racism: brought to you by Wall Street