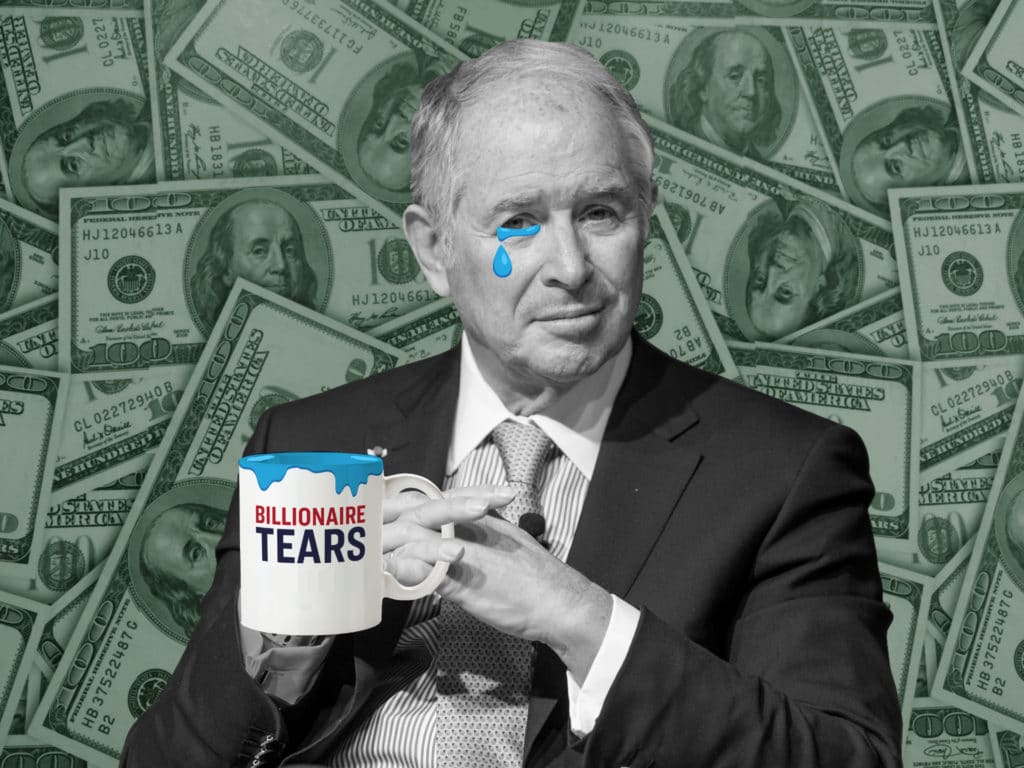 This piece was guest authored by Madeleine Johnsson.

Sen. Elizabeth Warren and Rep. Pramila Jayapal’s Ultra-Millionaire Tax Act of 2021 introduced today could not be a more timely reminder that the United States needs serious policy changes to address massive wealth and income inequality. While 8 million Americans slipped into poverty and half a million lives were lost to COVID-19 since the beginning of the pandemic — all with a disproportionately large impact on communities of color — the wealth of U.S. billionaires almost doubled, up $1.3 trillion. At this rate, it would take five more months for the wealth of the richest Americans to match the $1.9 trillion relief package put forward by the Biden administration.

U.S. Supreme Court Justice Louis Brandeis, the great antagonist of concentrated financial power, famously observed in the last century: “We can have democracy in this country or we can have great wealth concentrated in the hands of a few, but we cannot have both.” In this century, too, we have seen the wisdom of this insight. Billionaires who are the new robber barons — Schwarzman, Koch, Bloomberg, Paulson — have flooded the democratic process with money, often with the goal of securing policies that will make them and their children ever more wealthy as a key goal.

After the tech sector, Wall Street is the second-highest source of wealth for American billionaires, according to calculations by Americans for Financial Reform based on data collected by Americans for Tax Fairness and the Institute for Policy Studies. In the last 11 months, the financial industry’s 170 billionaires (163 men and 7 women) added 27 percent, or $180 billion, to their total wealth. And much of the wealth of Wall Street is in the hands of private equity and hedge fund executives.

Often, the business model of these funds includes manipulating the stock market, burdening companies with excessive debt and laying off workers and cutting costs to service it, moving profits offshore to avoid paying taxes, or other extractive financial and legal engineering. In other words, much of this wealth flows from a broken financial system that’s rigged to reward Wall Street executives who extract wealth from working people and communities. The nation’s 664 billionaires have $4.3 trillion in total wealth. One in every five dollars controlled by these billionaires ($818 billion) is in the hands of people in the finance and investment sector. 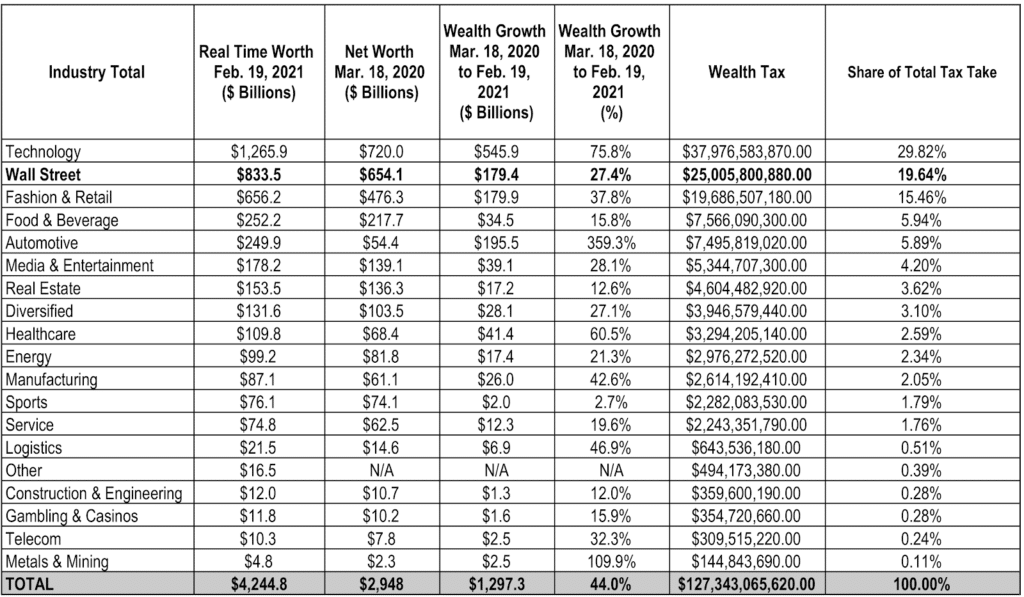 The Ultra-Millionaire Wealth Tax — a mere 3 percent of accumulated billionaire wealth —  would net $25 billion in the first year from the financial sector fortunes alone, according to AFR calculations. Almost half that amount —  $11.4 billion — would come from the top 15 richest finance moguls. Even among the very rich, wealth is concentrated among the super rich. (The Warren-Jayapal proposal, which includes a 2 percent levy on wealth between $50 million but less than $1 billion, would bring in around $3.0 trillion from 2023-2032, of which $0.4 trillion would come from the billionaire 1 percent surtax over that period.)

Warren Buffett and Michael Bloomberg, two Wall Street billionaires, have publicly endorsed a wealth tax plan in the past. They’re not the only billionaires asking to be taxed: 19 of them wrote an open letter to presidential candidates in 2019 with a similar request. For most Americans fortunate enough to own their own home, it is by far their greatest source of wealth, so in a sense, middle-class people already pay a wealth tax. The Ultra-Millionaire Wealth Tax would ensure that the super-rich pay taxes on all their assets, not just their New York mansions or Florida getaways, but their stocks, bonds, jewelry, sports cars, and art collections. 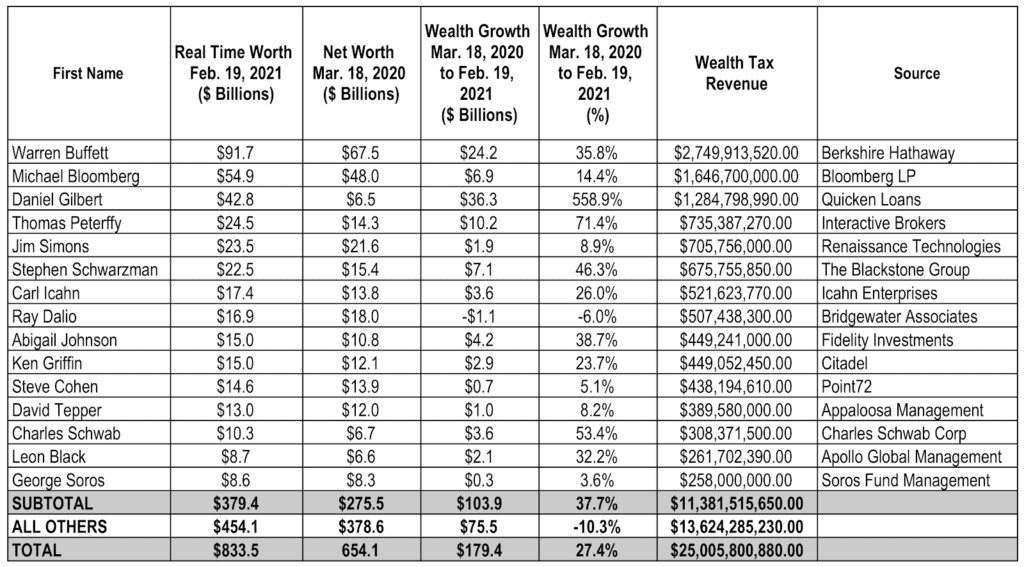 There is bound to be loud and hostile opposition from the billionaires who will pay the tax.

When President Barack Obama sought to close the so-called carried interest loophole that benefits private equity executives, Stephen Schwarzman compared the move to the Nazi invasion of Poland. That step would have cost him about $100 million per year. Imagine how Schwarzman, with his $22.5 billion fortune, will react when the Warren-Jayapal wealth tax demands a payment to the U.S. Treasury seven times that size.

In 2019, Leon Cooperman, founder and CEO of hedge fund Omega Advisors, pushed back on Warren’s proposed wealth tax plan to the point where he broke down in tears on national television. Currently the 90th richest man on Wall Street, Cooperman would part ways with about $75 million — a small slice of his total wealth of $2.5 billion. The rest of us should shed no tears for him.

The truth is, the super rich consistently pay less than the rest of us. Overall, America’s billionaires control two-thirds more wealth than the 165 million Americans in the bottom half of the wealth distribution. The 400 richest Americans own more wealth than all Black households plus a quarter of Latino households combined. The tax system is so full of loopholes and special breaks that families in the top tenth of a percent pay about 3.2 percent of their wealth in taxes, while the bottom 99 percent pay about 7.2 percent in taxes. That’s right, the tax rate for the rest of us is twice as high as the tax rate for the super-rich.

Reducing wealth inequality may seem like a daunting task, yet Brandeis recognized that “most of the things worth doing in the world had been declared impossible before they were done.” The Ultra-Millionaire Tax is an important step toward reducing inequality and ensuring that the rich pay their fair share.

The Save the Post Office Coalition reacts to Louis DeJoy’s 10 year planRioting, insurrection, and racism: brought to you by Wall Street

STATEMENT: Nothing Short of Biden Administration Leadership Will Stop DeJoy