Private equity firms have apparently discovered a vaccine that protects their bank accounts from the crushing economic effects of COVID-19. Perhaps they could give the rest of us a shot of this miracle cure?

More than half of the industry’s professionals received higher compensation in 2020 despite unprecedented economic contraction, according to a survey conducted by the executive search firm Heidrick & Struggles. Private equity billionaires — the extraordinarily rich titans of the industry — increased their net worth a total of $13 billion during the pandemic alone, according to calculations from Americans for Tax Fairness and the Institute for Policy Studies.

The rest of the country is not doing nearly as well. We know of no less than 98,000 businesses, many small family enterprises, that have permanently closed, while many others have filed for bankruptcy. Workers have felt the pain, laid off either because the pandemic-induced recession left them idle, or because their employers went belly up. Unemployment is at 6.9 percent.

Private equity’s money-spinning at a time of great distress for ordinary folks is nothing to celebrate. This industry has already feasted on valuable companies at the expense of employees in the past, especially in the retail industry, where private equity is responsible for 1.3 million job losses. And now, during the pandemic, private equity firms are circling, preying on struggling businesses they can purchase with the trillions they have on hand.

Private Equity’s Version of the One Percent

Private equity has flipped the paradigm of the 1 percenters; its own 99 percent did quite well. The economic effects of the pandemic struck only 1 percent of private equity professionals who reported a decline in their base salary this year, according to the survey by Heidrick & Struggles.

The majority remained financially unscathed by the pandemic. Of the 785 private equity executives surveyed in North America, 57 percent received higher raises in 2020, just falling short of the 57.5 percent in the previous year.

Unlike millions of unemployed Americans, the remaining 42 percent of the private equity executives who didn’t get a raise had no trouble putting food on the table or paying the rent or mortgage. Average associates at the smallest firms took home roughly $200,000 last year. Principal executives working at private equity funds worth over $2 billion got paid over $500,000 on average.

Battle of the Billionaires

The crème de la crème of private equity saw their net worth explode by $13 billion over the last seven months, according to research from Americans for Tax Fairness (ATF) and Institute for Policy Studies (IPS). For the ten richest men in private equity who accumulated the most wealth from the crisis, that’s $11.9 billion, distilled from ATF/IPS data.

The real beneficiaries are among the top ten billionaires of leading private equity behemoths like Blackstone, KKR, Apollo Global Management, and The Carlyle Group, shown in the table below. 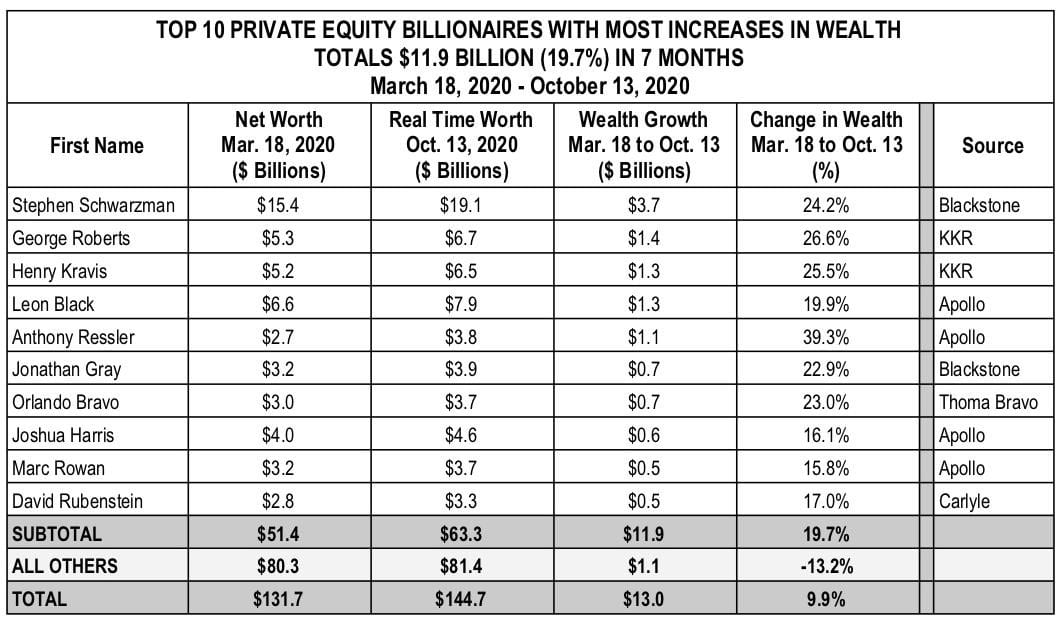 Source: Spreadsheet of AFR’s calculations from Americans for Tax Fairness and Institute for Policy Studies study.

The Rich Stayed Rich, and the Richest Got Even Richer

Stephen Schwarzman, chairman and CEO of the Blackstone Group, profited the most from the crisis. His recent $27 million donation to Republican campaign funds and conservative super PACs was just a small fraction of the $3.73 billion he reaped during the pandemic. Schwarzman is currently the 32nd richest person in the U.S with a net worth of $19.1 billion.

KKR co-founders George Roberts and Henry Kravis — known for their role in bankrupting Toys ‘R Us — saw their wealth grow by roughly 26 percent since the start of the pandemic, placing the cousins as the 105th and 111th richest billionaires in the ATF and IPS calculations. Apollo honcho Leon Black, the second-wealthiest private equity billionaire in the U.S., trails slightly behind the three in earnings from March 18 to Oct. 13 for now.

Only five private equity billionaires reported losses during the pandemic, including Ronald Perelman, chairman and CEO of MacAndrews & Forbes, who lost $943 million, a haircut to his current $6 billion fortune.

These numbers are just the beginning: private equity executives have yet to receive their end-of-year bonuses, payments typically many times the size of their base salaries.

Private equity’s enrichment-through-crisis is no accident. Getting rich counter-cyclically by preying on vulnerable companies is a feature, not a bug, of an industry that has historically been divorced from responsibility. In the 2008 housing crisis, Blackstone took home $7 billion after spending nearly $100 million a week buying cheap and foreclosed homes to rent to people who used to be homeowners.

That private equity titans piled up billions in additional wealth while the pandemic took 227,000 lives and forced 8 million into poverty, 17 million into hunger, 227,000 and millions more to the brink of bankruptcy adds insult to injury. Economic rebound looks unlikely without additional federal fiscal relief legislation to remedy the repercussions of high layoffs, stagnant wages, foreclosures and evictions, and a still-unchecked pandemic.

The gruesome disconnect between the prosperity of this Wall Street industry and the suffering of ordinary people during the pandemic underscores the urgent needs: immediate relief for people who are not immune from financial peril — and far-reaching reform of the predatory business of private equity under a new administration.

Let’s audit Trump and his friends, not families who get the EITCIn Coronavirus, Wall Street Senses An Opportunity to Privatize Our Schools. We Can’t Let Them.

Stock buybacks climbing to record highs, again. The SEC wants us to know the details, and so do we.