Communities and small businesses can’t access the same credit that wealthy corporations can. We need a public option for communities.

A public bank is owned by people through a city or state and takes deposits, for example from tax revenues. The bank then reinvests its profits back into that community. Whereas investor profits are the top priority for private banks, citizens can exercise oversight over a public bank’s practices. Public banks can save municipalities and states money, create jobs and boost the local economy, and lend counter-cyclically to blunt the impact of Wall Street booms and busts. As the Public Banking Institute puts it, public banks “allow communities to declare their independence from risky, expensive, for-profit banks, and keeps taxpayers’ money working at home.”

Our mission is to inspire, enable, and support Public Bank initiatives, returning control of money and credit to states and communities. Our vision is that a network of publicly-owned banks will be established that create affordable credit and allow communities to declare independence from Wall Street’s high-risk, expensive, unaccountable private banking system. Our goal: 5 by 2020! We hope to have five Public Banks well on their way to reality by 2020 and for people everywhere to understand how public banking can benefit them. For a list of public banking campaigns nationwide, click here. 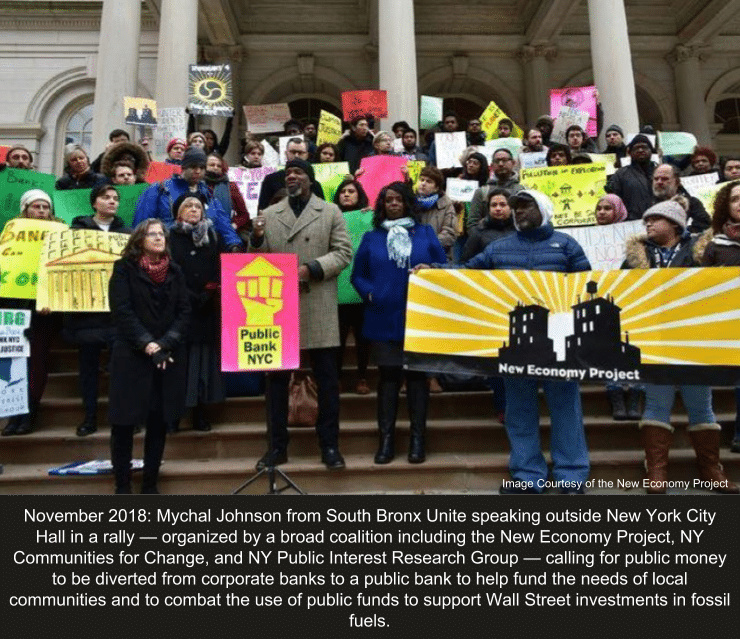 The Public Bank NYC Coalition believes public money should work for the public good, not private gain. We are pressing for the creation of a public bank for NYC, as part of a broader vision for economic and racial justice. We believe a public bank, with a clear mission to serve critical neighborhood needs, will help achieve economic security and shared prosperity for all New Yorkers. Through direct actions, political advocacy and other joint efforts we will make this dream a reality!

CPBA is a coalition of public banking activists in California working to create socially and environmentally responsible city and regional public banks. Eight cities and regions, including Los Angeles, San Francisco, Oakland, and Silicon Valley have come together to form the California Public Banking Alliance. All Alliance members are at various stages of starting public banks. The California Democratic Party has also adopted a resolution supporting the creation of state-chartered public banks.

Los Angeles manages more than five billion dollars in annual revenue collected from tax, fee and fine payers. The city maintains bank accounts with between $4B and $12B in cash, and manages up to $45B in investments for pensions and other funds. That money is currently held in accounts at commercial banks, where it earns next to zero interest. We can and must take back this money power for the people of the city.

“Building the People’s Banks: Establishing financial institutions and regulations that work for middle- and low-income Americans is possible. We just have to do it.” by David Dayen, The American Prospect, January 16, 2020.

“Why Public Banks Are Suddenly Popular: There’s only one in America—in North Dakota. But a growing movement is pushing for them across America, from L.A. to D.C.,” by Sarah Jones, The New Republic, August 10, 2018.

“When Banks Abandoned American Samoa, the Islands Found a Solution Nobody Had Used in a Century,” by Andrew Van Dam, The Washington Post, May 9, 2018.